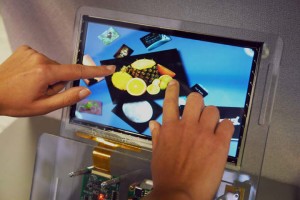 “Device manufacturers are recognizing the value of Android in medical, industrial and aerospace products,” explains Gary L. Barrett, Touch International Chief Technology Officer, and co-founder. “It was important for us to ensure Android compatibility in our projected capacitive solutions so that customers can easily integrate our touch screens into their next generation devices.”

Some of Touch International’s vertical market customers have already made the switch to Android, saving them money on overall development costs and reducing the time to market, while providing users with a powerful interactive experience.

Initially built for electronic handsets and tablet PCs, the now wide-spread Android system has become the OS of choice with embedded developers because it offers several benefits of traditional Linux® distributions. Considered an “out-of-the-box” Linux solution, Android is a complete package built on top of the Linux platform with libraries for audio and graphics, application framework, and browser and multimedia applications.

Click here to subscribe
Can you please explain what sputtering and micro-etching are and how are they...Touch International Expands Resistive Multi-Touch Up to 17 Inches
Scroll to top