The two companies share a joint objective to change the medical field and revolutionize touchscreens with antimicrobial protection for life. 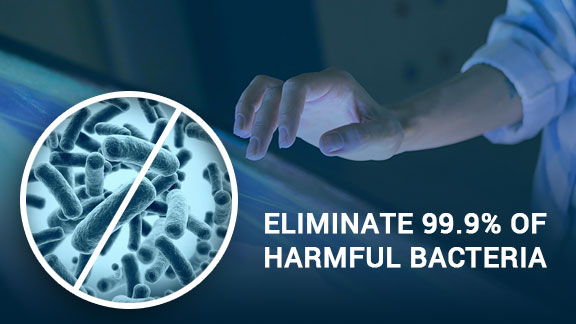 AUSTIN, Texas, Sept. 12, 2019 — Touch International (TI) has announced a partnership to incorporate Kastus® Intelligent Surface Technology™ to TI’s existing vertically-integrated touchscreen manufacturing capabilities. Touchscreens are an essential part of modern life. When there are four times as many germs found on a self-service touchscreen than on a toilet seat¹, it’s no surprise that many consumers are concerned about engaging with surfaces and being exposed to infectious germs such as MRSA, E. coli and C. diff. The Kastus® technology can be used in conjunction with, or independently of various surface treatments and substrate options required by high-reliability markets.

In a recent consumer survey commissioned by Kastus², over 70 percent of respondents stated they were worried about using public touchscreens. Bank ATMs caused the most concern among respondents, with doctor’s surgery and hospital check-in screens a close second. Fast-food chain order screens, supermarket self-service tills, and airport check-in kiosks were also identified as a concern. Of those surveyed, over 80% also stated they would actively seek out a business or establishment that offered a touchscreen with an invisible germ-free coating. These are the consumer and business needs that Kastus and Touch International will address in their partnership, with a special focus on the healthcare industry.

“Partnering with Kastus® to integrate their coating on our products will further enhance our touch display manufacturing capabilities, enabling us to bring more value to our customers and open new windows as we continue to push into the medical touch display market,” said Michael Woolstrum, Touch International CEO, in regards to working with Kastus coating technology. “This will be a game-changer for the medical industry, and our team is already identifying new opportunities to utilize the coating technology across all of the high-reliability vertical markets we serve.”

Kastus® confronts the on-going health issue of antimicrobial resistance with its breakthrough, patented coating applied during the glass manufacturing process to produce a self-cleaning surface powered by Kastus® Intelligent Surface Technology™. This invisible coating also transforms glass into a self-cleaning surface, reducing the need for chemical cleaners while providing germ-free protection. Once ‘baked in’ to the glass surface, the coating technology is incredibly durable, plus as it is non-leaching, it is also friendly to the environment.

“We are very excited to announce our partnership with Michael Woolstrum and his innovative team at Touch International. I am also delighted that we will be featured together via CNBC on the Advancements television series in Q4 2019,” said John Browne, founder and chief executive of Kastus, speaking of the new partnership. “We fully share Michael’s desire to change the medical field and revolutionize the touchscreen offer for consumers. Kastus is looking forward to going on this journey with such an innovative and forward-thinking organization.”

Kastus will be featured in Q4 2019 as a game-changing technology on the Advancements television series, hosted by Ted Danson. Touch International will be featured as an industry expert and thought leader during the segment.

Founded in 2014, Kastus® is on a mission to tackle the growing issue of antimicrobial resistance with its game-changing surface solution. Kastus uses a novel photo-physical coating process fueled by ambient air moisture and light. A reactive oxygen species is generated on the surface that disrupts the bacteria’s cell wall until it’s eliminated. Bacteria cannot build up a resistance or immunity to Kastus coating technology, and as the fuel source is unlimited, the protective antimicrobial power is ‘always on’ through the lifetime of the product.

Kastus uses a novel Photo-physical coating process fuelled by ambient air moisture and light, both unlimited fuel resources. The reactive oxygen species generated on surfaces by our patented process, effectively ‘bash’ the bacteria, disrupting its cell wall until it’s eliminated. The game changer here is that bacteria cannot build up a resistance or immunity to Kastus® coating technology and as the fuel source is unlimited, the protective antimicrobial power is ‘always on’ through the lifetime of the product.

To find out more about Kastus visit http://www.kastus.com

² Research conducted by Trend-Monitor in June 2019, with a representative sample of 1000 UK consumers