Austin, TX – July 29, 2014 – Touch International, a leading supplier of custom touch screens and enhanced displays, has introduced a new 10.4” wide-temperature, super-bright industrial liquid crystal display (LCD). The LCD is part of a growing library of customized displays in furtherance of the company’s 2014 enhanced display and product realization initiative and was developed at the T.I. Engineering and Design facility located in Austin, Texas. 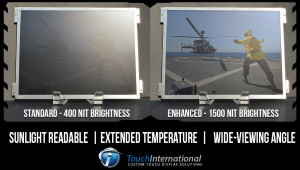 The LCD utilizes ultra-bright, state-of-the-art LED backlights producing up to 1,500 nits of brightness. This is 5-6 times brighter than a standard off-the-shelf monitor or industrial display. The LED backlight and patent pending drivers have a life expectancy exceeding 50,000 hours of operation. In testing, the company added a projected capacitive touch screen with ruggedized cover glass which was optically bonded to the display and still achieved over 1,300 nits of brightness. The standard 4:3 aspect LCD features 1024-by-768 XGA resolution, 1400-to-1 contrast ratio, 178-degree viewing angle, and only weighs 350 grams.

The new display also features an extended operating temperature range of -30C to +80C for reliable operation in any environment. “We continue to add value and increase capabilities for our customer’s applications in ways competitors simply cannot,” says Bill Linzmeier VP Business Development. “The key to this display is the low price and unbeatable combination of features. COTS displays with comparable brightness are out there, but can cost up to five times more than our panel.” The industrial panel has also been tested for thermal shock, vibration, mechanical shock, and more.

The new display is compatible with Touch International’s existing enhancement offerings such as touch panels, EMI shielding, ruggedization, optical bonding, and other value-add services. This display is ideal for use in a wide range of applications including marine, military, transportation, industrial, public use terminals, surveillance systems, amusement parks, kiosks, and more.