First off, everything will be ok! Being exposed to germs can be a good thing for keeping your immune system strong and healthy. With that being said, there are a number of ways to go about cleaning and disinfecting touch panels with very minor, if any repercussions.

Resistive has one of the best reputations for durability and requires very little maintenance to keep in good shape. When building Resistive touch panels, they go through a series of processes, two of which consist of a hot hydrochloric acid bath, followed by a hot lye bath. If the screen is able to withstand opposite ends of the PH balance before it even gets into your hands then you must know it’s resilient.

PCAP is even more durable, thanks to the vast majority built with glass covers. 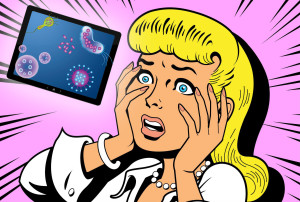 Cover glass has countless advantages including clearer resolutions and scratch resistance while matched with an incredible lifespan. Speaking from a chemical stand point, glass is virtually indestructible; there are very little chemicals that would harm the glass that wouldn’t harm a human. So, don’t worry as much about damaging the screen, we built them to be tough!

The most commonly used solution for Resistive and PCAP is just a simple isopropyl alcohol sprayed on a dry or soft cloth. Try to avoid using organic solvents and for dirt or residue use a neutral detergent or ethanol for clearing the touch panel.

A little known fact that might calm your nerves is every person has more germs on them and inside them than cells in the body. So go ahead and disinfect your workspace but don’t feel the need to constantly clean; it may do more harm than good!

http://touchinternational.com/wp-content/uploads/2018/05/TI-Logo-Long-Caps-Web-300x54.png 0 0 TouchGuy http://touchinternational.com/wp-content/uploads/2018/05/TI-Logo-Long-Caps-Web-300x54.png TouchGuy2015-02-01 09:43:512015-11-24 15:32:16I currently work in a warehouse where I come in contact with both Resistive and PCAP touch panels. I have heard that touch panels spread a lot of germs because they are used frequently and are not cleaned very often. I was just wondering, what would be the best solution to clean a touch panel? Can I use the same solution for both? Can I damage the screen by cleaning it or mess up the resolution? All I want is to be clean and germ free!

You are not alone in the cold my friend. First, this “iPad” type touch screen you are referring to is using projected capacitive (PCAP) technology. Without diving into detail, a “touch” is sensed when you make contact with the screen, basically grounding out the circuit. That’s right, no matter what anyone has said about your personality, make no mistake that you sir are electric. The problem in Antarctica isn’t so much the temperature, it’s the fact that you certainly do not want to take off your gloves in those temperatures. Now, quite a few companies manufacture “phone friendly” gloves with a little strip of conductive material woven on the pointer finger from the inside out to bridge the gap from finger to screen. Maybe I shop at the wrong places, but most of these gloves seem a little light for sub-zero death freeze. Since that may not be an option, some PCAP screens can be tuned to handle gloves – but again, it’s the thickness of the material separating man and machine that gets in the way and can result in an overly sensitive touch screen when the gloves come off.

I apologize for throwing my “sales guy” hat on in advance, but let’s switch gears and talk new technology. For this exact reason (ok there’s a few others) the mad scientists here at TI have developed a new technology that gives your freezing fingers the freedom to be covered in any glove you choose and still get the benefits of a multi-touch interface on whatever device you’re using. It’s called PCAP Plus. I don’t want to drill down too far, but what we’ve done is combine the best of resistive touch screen technology, with the features of PCAP (multi-touch, gesture, etc) and created “Frankenscreen.” Ok well I wanted to call it “Frankentouch” but they wouldn’t let me. Now there are far more benefits than just using gloves with this new technology, especially for the military, but for you and whatever device you may be trying to develop here – this is the technology for you.

While touch may be a pita while roaming the frozen tundra, I think you may be overlooking a potentially bigger problem – the display. LCD’s and I have a lot in common – we’re square and we don’t like the cold. The colder it gets, the longer it takes for your LCD to display an image, and the dimmer your image gets. If you dip to around or below -35 degrees C, you can have permanent display damage from the liquid crystal actually freezing. Fortunately, there is a solution around this problem. Transparent heaters (sometimes simply referred to as LCD heaters) are exactly what they sound like. We take a piece of glass, coat it in a conductive material (most commonly ITO) and then give it power. You can tweak the coating depending on how much power you need and how big of a display you have. The heater is then bonded to the LCD using a UV curable, optically clear adhesive. Finally, your touch screen is attached on top of that (most likely using the same adhesive), creating a sandwich of functional touch display goodness. This will keep your display nice and toasty while you freeze to death, giving you the “instant on” that I’ll be getting from my iPad in the comfort of my living room.

So, pioneer of the great frozen unknown, I hope I answered your question and then some. Now if you’ll excuse me, I have sudden urge to make hot cocoa and s’mores.

Nautical displays have traditionally topped the list of most difficult touch applications. It seems that boats and ships just have it in for touch. First there is the corrosive effect of salt water, so the legacy surface capacitive was out. Then there was the water itself, whether from rain or the stuff that floats-the-boats, which ended the possibilities for SAW, IR, and projected capacitive (PCAP). Resistive would work, but the internal reflections from the touch surfaces made sunlight readable displays really hard to pull-off and the image quality is really lacking. Plus, no multi-touch certainly makes it difficult to zoom in on that school of fish cruising 50ft below you.

So, Touch Guy picked this question as a vehicle for (unabashed?) self-promotion of his new PCAP Plus. It works great in boats, in fact, that’s what we developed it for in the first place. Rain, salt-water, and spilled coffee (or beer) are ignored. You get your pretty picture from that high-end LCD back. Even better for any military guys out there, now you can clamp down on that EMI so the display will not be a beacon for the bad guys missile (or maybe NSA spying). Right out of the box it passes both DO-160G and MIL spec 461. You retain the ease of multi-touch and get a system that will never wear out – whoa, you got it all. There is a small premium over standard p-cap, but PCAP Plus is a complete nautical touch display problem solver!!

Just remember the words of Robert Rose, “Ships are the nearest things to dreams that hands have ever made.”

http://touchinternational.com/wp-content/uploads/2018/05/TI-Logo-Long-Caps-Web-300x54.png 0 0 TouchGuy http://touchinternational.com/wp-content/uploads/2018/05/TI-Logo-Long-Caps-Web-300x54.png TouchGuy2014-02-03 01:29:072015-12-01 12:59:52Our team is developing a touch module for boats. This thing will be getting a healthy dose of sun, water, and sometimes saltwater. At the same time, it will need to do everything from finding fish to navigating the open seas, giving system diagnostics, and providing entertainment. I understand water can be a problem for touch screens. Why is that? What’s the best solution for me?