By providing a direct electrical interface between the touch screen flex circuit and the board, Touch International ensures that the product’s connection is mechanically and electrically robust, providing the low-profile and noise resistance of chip-on-flex with the added durability of PCB boards, essentially eliminating the need for custom chip-on-flex electronics. 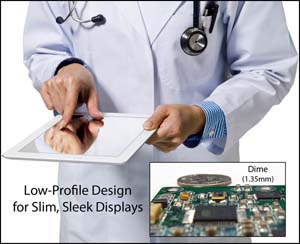 “We are a little bit like the Subway of touch screens,” says Touch International CEO, Michael Woolstrum. “You pick your features, and we build it. With our new MulTI-Touch Baseline Series, we are often able to reduce the time, energy, and money it typically takes to do a custom build.”

Supporting projected capacitive displays up to 15.6”, with up to 9mm of cover glass, the MulTI-Touch Controller Line gives customers the same design flexibility and customization that Touch International is known for, without high NRE fees.

At Display Week, attendees will see a wide range of touch screen, display enhancement and cover glass components that can be mixed and matched to fit individual projects and requirements, helping to maximize the time and money spent perfecting custom displays.

For more on Touch International, visit booth #749 at Display Week or go to www.touchinternational.com/SID2012.