“We’re excited to be working with Touch International on the Synergy™ Touch technology for the Modbook and the Modbook Pro,” said Axiotron founder and CEO, Andreas E. Haas. “Because of their leadership in touch screen technology, Touch International is both a dependable provider of top-quality components for Axiotron as well as a valuable partner in our efforts to develop innovative products for our customers.”

The Modbook was introduced to the market in December 2007. It is the world’s first Mac-based tablet computer. Axiotron’s 15.4-inch Modbook Pro is scheduled to be released in June 2009.

Axiotron’s revolutionary Synergy Touch Technology, which will be available as an option on the Modbook (beginning in April 2009) and standard on the 15.4-inch Modbook Pro, enables both pen and touch input 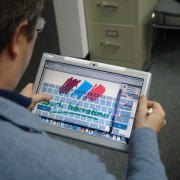 simultaneously. The Axiotron units incorporate a projected capacitive touch screen and electronics from Touch International and the Apple computing architecture. The result: a tablet computer superior to all other tablets on the market with unparalleled graphics performance and computing power.

With the Synergy Touch technology, on-screen buttons and shortcut keys give Modbook and Modbook Pro users a quick and smooth transition between tools and programs. This function meets the critical demands of creative professionals using graphic-intensive programs to create 2D, 3D, and video images. 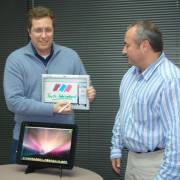 “Axiotron is aggressive, inventive and fun to work with as they take the impossible and make it achievable,” said Michael Woolstrum, Touch International co-founder and CEO. “Leveraging our joint product development on the Modbook to create the sleeker and more demanding integration required for the Modbook Pro was a challenge for both companies, but the end result created a product that is rewarding for Axiotron and satisfying to our engineers.”

About Axiotron
A high-tech solution hardware manufacturing company and an Apple Premier Developer, Axiotron produces the Modbook, the award-winning tablet Mac solution. Following its unique vision of Customizing Your World™, Axiotron is dedicated to becoming a leading high-tech innovator through the conception and development of intriguing digital lifestyle products. In addition, Axiotron offers its product development expertise to companies in need of custom hardware solutions. Founded in January 2005, Axiotron is a publicly traded company listed on the TSX Venture Exchange (TSX-V: AXO) in Toronto, Canada, with headquarters in El Segundo, California.

Click here to subscribe
Touch International Recommits Austin HeadquartersIt was with great excitement that I received my projective capacitive multi-touch...
Scroll to top