Exclusive PCAP Plus™ technology combines the many benefits of projected capacitive touch technology with multi-input in a package that complies with military and aerospace EMI requirements. 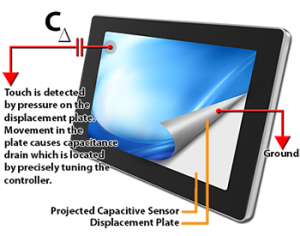 Austin, TX – March 10, 2014 – Specialty touch screen and display manufacturer, Touch International confirmed today the release of a new touch sensing technology that overcomes the boundaries of current projected capacitive (p-cap) offerings. PCAP Plus technology features multi-touch with gestures and works with fingers, heavy gloves, or any other input devices. Additionally, the sensor is designed with a unique construction that performs in compliance with military, aerospace, and medical EMI/RFI requirements yet maintains excellent optics.

“Our experience in the high-reliability markets has shown a clear chasm between resistive and projected capacitive touch technology features and limitations,” says Michael Woolstrum, CEO. “With PCAP Plus we’ve not only bridged the gap, but have also provided the added bonus of EMI/RFI performance. From the battlefield to the operating room, this changes everything.”

Touch International’s team of engineers at the Austin, TX R&D center started with their latest p-cap sensor designs and ultra-thin controllers. Using an extensive library of proven components and advanced tuning of the controller, they developed a conductive upper displacement plate. The plate gives the sensor multi-input properties and EMI performance without compromising optical clarity or multi-touch abilities. The company also ensured the sensor can be built using the myriad of substrates and transparent conductors the market has to offer.

PCAP Plus is immune to on-screen contaminants, extreme temperatures, and even works when submerged in water. While the company has developed traditional p-cap sensors that have immunity to water mist, p-cap remains unable to maintain full functionality with coalesced water or while submerged. Easy to use, PCAP Plus requires only light pressure to activate and is precise and highly responsive. PCAP Plus doesn’t require recalibration and is maintenance-free.

One of the most common problems implementing projected capacitive touch technology is electromagnetic interference or susceptibility. Independent lab tests on TI’s PCAP Plus show all sensors tested pass EMI/RFI compliance for MIL-STD-461F, DO-160E, and CISPR25. This enables military, aerospace, transportation, and medical designers or manufacturers to tackle EMI/RFI compliance and regulation issues easily at the component level.

“Since projected capacitive exploded on the market in 2007 with the iPhone, you haven’t really seen a ‘next big thing’ in touch,” says Shaun Detmer, Marketing Director. “The mission critical markets have been, in many applications, stuck with outdated resistive technology. Those days are over.”

All PCAP Plus touch sensors are Windows 7/8 compatible and can be customized to work with any enclosure, bezel, and display. Sensors are available with I2C or plug-n-play USB connectivity. Current designs can be scaled up to 12 inches and will be available up to 24 inches in Q2 2014. Demo kits are available built to order and can feature add-ons such as sunlight readable displays and optical bonding.

Click here to subscribe
Our team is developing a touch module for boats. This thing will be getting...I can’t seem to find a straight answer on this. What are the differences (if...
Scroll to top