Austin, TX – October 16, 2012 – Touch International, Inc., one of the world’s leading manufacturers of touch technology and display enhancements, announced today the planned acquisition of a former Taiwanese touch screen company, as well as the continued expansion of its manufacturing facilities in Zhongshan and Shenzhen, China. The new development will further compliment the Austin, Texas facility with added capacity and extended manufacturing capabilities. 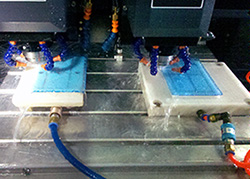 The purchase will encompass all of the Taiwanese company’s touch screen technology, equipment, and raw materials, which will be used in a 5,000 ft.2 extension of the facilities that will broaden Touch International’s value-added enhancement and touch screen manufacturing abilities. Equipped with a Class 10,000 clean room, the new areas will house additional cover lens manufacturing capabilities, a second optical bonding team and a line designated for contract manufacturing assembly.

“The acquisition of these assets will only further complement our vertically integrated system in our Shenzhen facility by increasing the capacity of our touch screen, cover glass and LCM (touch screen module) manufacturing lines,” said Michael Woolstrum, co-founder and CEO of Touch International. “In turn, we will be able to speed up production and reduce the cost for our customers in specialized industries where time and money are key factors.”

As part of a $10 million expansion effort and technology development plan, the progressive improvements are aimed at bolstering touch screen production, reducing prices and shortening delivery times. The continuation of growth is the next step after the complete renovation of the Austin factory clean room and the opening of the Shenzhen manufacturing facility in 2011.

According to Woolstrum, touch technology and display enhancements will continue to grow and mature in specialized industries such as military land vehicles, airplane navigation control, and advanced medical devices. “With the demand in these markets on the rise, we need to evolve with the market and position ourselves to accommodate increasingly strict requirements and regulations,” explains Woolstrum. 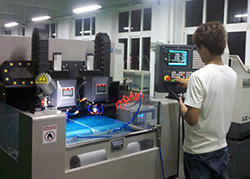 “By continuing to build our value-added enhancement capabilities and gain capacity, we are able to welcome what we call the ‘WOW’ (Weird or Wacky) products which are what set TI apart from the rest.”

About Touch International
Touch International is the leading manufacturer of specialty touch screens and display enhancement windows, and is the largest touch producer in North America. The company is world-renowned for its expertise in optically clear touch panels, EMI filter technologies, and custom touch screen designs for military, aerospace, medical, transportation and retail applications. Touch International was the first to produce the Apple iPhone-type projected capacitive touch screen, and also builds resistive sensors and glass filter products used in touch screens, display windows, anti-reflective and anti-vandal filters. The company is headquartered in Austin, Texas and has complementary sales and manufacturing facilities in Europe and Asia.